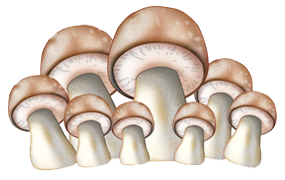 Also known as Himematsutake, Cogumelo de Deus and Cogumelo do Sol, Agaricus Blazei Murill is a mushroom that is native to Piedade, a small village located in the suburbs of Sao Paulo, Brazil.

The climatic conditions prevalent in Piedade, day time temperatures of 35 C-38 C, night time temperatures of 20 C – 25 C and average humidity of 80%, are perfect for the Agaricus Blazei Murill Mushroom (ABM) to grow and flourish. In fact the very survival of ABM is affected by the presence or absence of these external conditions.

It was Dr. Takatoshi Furumoto who first discovered Agaricus Blazei Murill Mushroom. He stumbled upon it when he was trying to determine why the inhabitants of Piedade and its surrounding regions were healthier than the general population and had lower incidences of cancer and geriatric diseases. He suspected that this was due to their abundant intake of this mushroom.

Agaricus Blazei Murill Mushroom contains large quantities of polysaccharide compounds, which help boost the immune system by increasing the number of white blood cells and boosting the production of tumor necrosis factor- alpha. In addition it also helps in establishing an equilibrium in the system as a whole by lowering the hyper-reaction of the immune system.

Agaricus Blazei Murill Mushroom has the highest concentrations of polysaccharides (Beta) 1,6-D Glucan and (Beta) 1,3-D Glucan as compared to any other mushroom type including Shitake, Maitake and Reishi. These elements, together with ribonucleic acid protein compounds, xyloglucan, cid heteroglucan and lectin are responsible for enhancing the activity of macrophages that destroy or inhibit the proliferation of damaged cells. Agaricus Blazei Murill Mushroom also contains high levels of Vitamins B6 and B12, palmitorenic acid, linoleic acid and ergosterols.

There is a significant reduction in side effects when Agaricus Blazei Murill mushroom is taken during Chemotherapy.

The high price of Agaricus Blazei Murill Mushroom is attributed to the fact that this plant is very difficult to cultivate. It requires very specific climatic conditions and only grows between the months of October and April. Extreme cold or heat can shock the mushroom and severely inhibit its growth.

The amount of Agaricus Blazei Murill Mushroom found in nature is far too little to meet the ever increasing demands and more and more mushroom producers are now planting and harvesting this mushroom on a larger scale. Unlike other mushroom varieties, which thrive under lower temperatures and shady conditions, Agaricus Blazei Murill Mushroom flourishes with plenty of sunlight. It’s normal growth size is approximately 10 to 15 centimeters.

Currently, Agaricus Blazei Murill Mushroom is being cultivated not only in Brazil but also in several other countries including the US, Korea and Japan.

Reishi mushroom is revered in the Oriental traditional medicine as a fungus that could make a person immortal. This mushroom is used largely as a medicinal herb. The bitter taste and wood like texture of reishi mushroom will not be fit for preparing soaps and salads.

Nonetheless, people, who are aware of the large number of health benefits of this mushroom, have no qualms of having reishi mushroom in their soaps. However, largely, reishi is consumed in the form of tea.

For best results, one should eat reishi mushroom in the morning in empty stomach. Taking enough water along with this mushroom helps to increase the efficacy of reishi mushroom.

In traditional Chinese medicine, reishi mushroom is recommended to fight coughs and colds. It could significantly reduce the symptoms of chronic bronchitis and asthma.

The bitterness of reishi mushroom, derived from triterpenes, a type of plant compound found in this mushroom, promotes liver function. Reishi mushroom can also be used for treating hepatitis B.

According to studies, reishi mushroom could prevent as well as arrest growth of cancerous cells. This mushroom could be effective in preventing as well as slowing down the development of prostate, breast and bladder cancers.

The reishi mushroom is also a powerful antioxidant and anti-inflammatory agent. It can prevent heart diseases and Alzheimer’s disease. It can reduce inflammation and Arthritis pain could be treated with this mushroom.

Lion’s Mane Mushrooms are fantastic immune system boosters. Those who take Lion’s Mane claim that within a week they are able to notice a difference in memory after building up within the immune system. How people take Lion’s Mane varies. People may find that a regular intake of juices with the mushrooms can significantly influence the immune system. Some individuals with arthritis even notice a difference in their joint movement after taking Lion’s Mane for a while. This could be because the body is able to better fight any toxicity within the body and protect the joints from inflammation and infection.

Lion’s Mane and the Mind

Lion’s Mane is certainly gaining more attention than what it used to because of its ability to ward off dementia. Perhaps this is why it has been used as a treatment for some of the world’s most difficult diseases for centuries. At one time, Chinese tradition only allowed Lion’s Mane to be eaten by Emperors. This shows how the effect of the mushroom was already known by Chinese doctors. They used Lion’s Mane to help relieve issues involving the digestive tract such as duodenal ulcers and stomach ulcers. The mushrooms were also given to those with cancers of the esophagus, the duodenum, and of the stomach.

These effects are due to the beta glucan polysaccharides, or complex sugars, along with fatty acids and polypeptides. All of these have a lot to do with the curative effects. Also contained within Lion’s Mane is oleanolic acids and adenosine. These stimulate the modulation of the immune system and the induction of interferons. These processes boost the number of white blood cells to help in healing processes. The healing of ulcers is accelerated, gastric mucus barrier function is enhanced, and anti-inflammatory effects are exhibited.

This is basically a prevention of the breakdown of healthy neurological function. If there is a breakdown, that breakdown can be stopped and further breakdown prevented. This is not a cure for dementia, but the benefits are significant in slowing down the effects and possibly halting any further damage. To get optimum effects, it is important to add Lion’s Mane to an existing supplement schedule. Do not change the intake of vitamins and minerals. Simply add Lion’s Mane to the routine to reap the benefits of all the things you are doing to improve your health.

Right now, the most conventional method to treat Alzheimer’s Disease is to treat those symptoms that are the result of dying neurons. With Lion’s Mane, the cause is treated. The mushroom actually has an influence on what the cause is. It is not completely understood what leads to the loss of Nerve Growth Factor, but replenishing the Nerve Growth Factor through a natural remedy makes a significant difference.

A person can also add Lion’s Mane to their diet to simply work on preventing dementia. Keeping Nerve Growth Factor fed will help it remain intact as you age. You can also reap the other health benefits that Lion’s Mane has to offer.

Other health benefits that are exhibited by Lion’s Mane include regulating cholesterol levels and blood sugar. These are very important for healthy lifestyles. What is even better is that Lion’s Mane is deemed completely safe. There are no signs of toxicity since the mushroom itself promotes the expulsion of toxins within the body. Scientific research has shown that there are no known side effects, which may have something to do with the fact that Lion’s Mane is completely natural and edible. Throughout recorded history, there have not been any side effects recorded. If there have been any, they have not been significant enough to mention.

It is clear to see that the benefits are many. Lion’s Mane may seem somewhat complicated, but it is that complicity that makes it so effective. It works on bodily processes to ensure they continue to function the way that they’re supposed to. This provides a degree of equilibrium in your life that you need to function properly. You’ll feel better and you’ll even live longer when you take care of yourself. The benefits can’t be denied, so it is ideal to start your intake of Lion’s Mane as soon as you can.

The Power Within the Mushroom
By Omid Jaffari

The Shiitake mushroom is the most widely cultivated specialty mushroom in the world and is both a prized medicine as well as a culinary delight. The shiitake (Lentinula edodes) is an edible mushroom native to East Asia, which is cultivated and consumed in many Asian countries, as well as being dried and exported to many countries around the world. It is a feature of many Asian cuisines including Chinese, Japanese, Korean and Thai.

Because of its traditional use in folk medicine and its availability, shiitake mushroom has been the subject of intense research. Cochran’s review of medicinal

Shiitake is now one of the most popular sources of protein in Japan, and a major staple in China, and other parts of the Pacific Rim. As a food source, it has the combined attributes of being appetizing, nourishing, dietetic and healthful. Shiitake has adequate nutritional qualities to serve as a main dish. It adapts well to recipes as a meat substitute.

The antiviral effects are believed to be caused by Shiitake’s ability to produce interferon. Researchers have reported that consumption of Shiitake mushrooms lowers blood cholesterol levels by as much as 45 percent. The most dramatic results occurred when high-cholesterol foods were eaten simultaneously with Shiitake . In two human studies, cholesterol dropped 6 to 15 percent when the amount of Shiitake consumed was nine grams per day or approximately 10 dried medium-sized mushrooms.

Additionally, the ability of shiitake to accelerate the metabolism and excretion of cholesterol was first reported in 1966 by Kaneda and Tokuda. The Donko and Koshin varieties of shiitake produced a 45% and 36% reduction in total plasma cholesterol respectively. The active principle is an amino acid named eritadenine. Eritadenine lowers all lipid components of serum lipoproteins in both animals and man. It exhibits very low toxicity and is effective when administered orally. One hundred twenty-four derivatives of eritadenine have been synthesized and tested. Patents for consumable products capitalizing on shiitake hypocholesterolemic effect have been issued. Lowering plasma lipids by a method as simple as consuming a food or beverage is very appealing to the health-conscious public.

Lentinan, which is the name given a highly purified polysaccharide fraction extracted from Shiitake mushrooms, is an approved drug in Japan. It is generally administered by injection and has been used as an agent to prolong survival of patients in conventional cancer therapy as well as in AIDS research. Lentinan is commercially available for clinical use. “In Japan, mushroom extracts have become the leading prescription treatment for cancer”. Lentinan is not only useful for cancer treatment, but may also prevent the increase of chromosomal damage induced by anti-cancer drugs. With lentinan there are no known side effects of any serious nature.

In Japan treatment of mice with lentinan prior to radiation provided complete protection from a reduction in white blood cell counts. But in the west, we are still in the dark ages; making immunopotentiators available to patients undergoing radiative therapy has yet to be accepted here. There are also documented cases of greatly reduced side-effects from radiation and chemotherapy in patients who took herbal immunopotentiators at the same time. The noncytotoxic nature of polysaccharides offer a way to destroy unwanted cells without damaging the host. Chihara writes that “The leading principles of the function of lentinan resides in the fact that it can cure patients by restoring their homeostasis, and through enhancement of their intrinsic resistance against diseases.”

As a functional food,
Shiitake contains all eight essential amino acids in better proportions than soy beans, meat, milk, or eggs as well as a good blend of vitamins and minerals including vitamins A, B, B12, C, D and Niacin. Shiitake produces a fat-absorbing compound which aids in weight reduction.